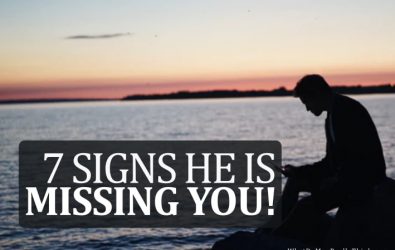 How to Tell if My Boyfriend is Missing Me? 7 Signs He Is!

How To Say Sorry To Your Boyfriend in a Sweet Way?

How Do I Know if My Boyfriend Really Loves Me?

6 Sweet Things To Do For Your Boyfriend

7 Signs Your Boyfriend is Planning to Propose!

102 Most Popular Gifts For Your Boyfriend or Husband! (2020 Updated)

Disclaimer: As an Amazon Associate we earn from qualifying purchases. Having a hard time finding the perfect Christmas gift for your man? Don’t worry. We got you covered. We put together for you the ultimate list of man gifts (stuff that your boyfriend actually wants), based on the popularity of the item. Most gifts on […]

How Can I Tell If My Boyfriend Is Right For Me? (6 Signs to Look For)

Relationship is all about a “wavelength” match. If your boyfriend understands your wavelength, and you understand his, then you are in for a fulfilling and fun relationship. Ups and downs are bound to happen, and that’s normal, but what’s important is that there is an “undercurrent” of trust and love which is always present in […]

How To Tell If A Guy Is Flirting With You? (6 Signs To Watch Out For)

So how do you tell if a guy is flirting with you? Most men are like open books. What they feel inside is what shows outside. So unless the guy has perfected the art of hiding his emotions and feelings, it’s quite easy to figure out what’s going on in his mind. As a girl […]

What Do I Write in My Boyfriend’s Birthday Card? (4 Things You Must Include!)

Words, when used creatively, have the power to generate some touching emotions. On the other hand, deep emotions have a way of generating touching words. No wonder most romantic people are generally good at poetry. When there is true love in your heart it will reflect in the words you write. Birthday cards usually come […]

What Does It Mean When A Guy Says He Needs Time?

Some intimate relationships are harmonious and they move into different phases with ease. There is the initial dating phase which then migrates to a committed relationship phase which eventually matures into the final bonding of a marriage. This is of course the ideal situation. Not all relationships work so smoothly. The issue of commitment in […]

The nicknames you use for your boyfriend (or partner/husband) should describe some aspect of his personality. The fact that he calls you ‘babe’, instead of some short form of your original name, gives you the incentive to call him ‘cute names’ not necessarily a modification of his original name. Nicknames Based on Personality The following […]

9 Important Things That Guys Want in a Girlfriend

As human beings we are all unique and we bring our distinctive perceptions, and conditioning, into every aspect of our life. So there can be no actual generalization on what guys look for in their girlfriend because it will differ from guy to guy. Some guys might just be looking to have some fun and […]

My Boyfriend Is Pretty Self-Absorbed

Question by Reene: I think my boyfriend is pretty self-absorbed. He is affectionate and loving, but I feel like he doesn’t really see me sometimes. He is very wrapped up in his own world and when I try to talk to him about something that is bothering me it is never the right time; he […]

All My Friends Are in a Relationship And I am Single – What To Do?

There comes a time in everybody’s lives where they develop an interest in the opposite gender. A certain curiosity may have always been present but once you reach a certain age, this curiosity often goes into overdrive and crosses the line into new territory. Of course, there are variations between each of us in terms […]

My Parents Don’t Like My Boyfriend! What Should I Do?

What’s the Best Way to Break Up With Your Boyfriend? (5 Important Steps)

Relationships have their ups and downs, and are sometimes fraught with challenges. Dating, “live in” relationship and marriage are usually the phases that couples go through when they are involved in a long-term relationship, but sometimes conflicts may arise that dent the fabric of the association. Break ups are a result of unsolvable differences and […]

I Have a Boyfriend But I Like Someone Else – What Should I Do?

Sometimes, our feelings run amok. Most of the time, there is nothing we can do to change them. We can try to reign them in, we can attempt to bury them deep down but the reality is – they always push their way back up to the surface. So, what to do when you are […]

I am Starting to Like My Best Friend’s Boyfriend! What Should I Do?

So there’s this really cute guy you like. He makes you laugh, blush and every single thing he does is fantastic in your eyes. You have a huge crush on this guy. The only problem is, he is your best friend’s boyfriend. Bam! Just like that the bubble burst and you’re back in the not-so-nice […]

I Hurt My Boyfriend’s Feelings and Now He Wouldn’t Talk To Me. What Should I Do?

Question by Sparrow: My boyfriend and I had a misunderstanding and unintentionally, I hurt his feelings. I’m going through depression so my thoughts are all over and in the process, I unconsciously accused him of leaving me in the cold which he never did. I didn’t mean to imply that he’s abandoned me. Guess being […]

How Do I Get a Guy to Open Up to Me Emotionally?

Question by Peach: I recently started seeing this guy who lives an hour away from me. We chat every day on social media but he doesn’t say much even when he contacts me first. I would blame that on him being busy since he does own a business. We don’t call each other either and […]